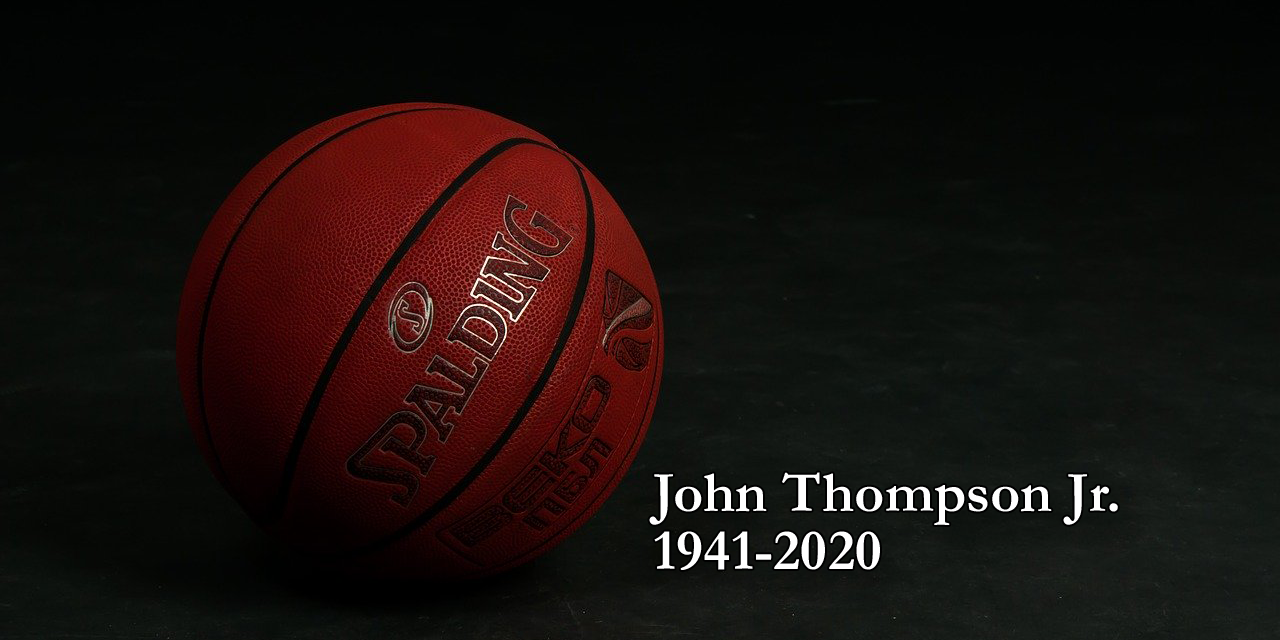 I have spent a lot of time wrapping my head around Monday’s announcement of the death of former Georgetown basketball coach, John Thompson. For the last several days, I have been reflecting on what the man meant — to my alma mater, the sport of basketball, the fight against racism, and to so many people, including me. Quite simply, the man was a giant, in every sense of the word. And the more time I spend reflecting on this, and the more memories that come back to me, the more profoundly I feel the loss.

In my teens and twenties, the Big East Conference was THE center of college basketball. And no discussion about the Big East could get past the first sentence without mentioning Georgetown University and Coach John Thompson. This little Catholic school in DC, with no basketball tradition prior to Coach Thompson’s arrival in 1972, (and little tradition since he left) was at the center of the college basketball universe throughout the 1980s. Between 1982 and 1985, Georgetown won one championship (in 1984), and easily could have won two more. It took a late jumper and a blown pass (in the 1982 championship), and the most unconscious shooting night in college basketball history (in the 1985 championship), to deny Coach Thompson’s Hoyas three championships in four years.

But that’s just basketball. There is so much more to this story.

John Thompson was the first person to teach me anything about race and racism. How, you ask? It’s not like we were close personal friends. We weren’t. I met the man, several times, as a student journalist covering the team… more on that in a moment. But we didn’t have anything resembling a relationship. He had no idea who I was.

Yet he still had a huge impact on me, which became all the more clear the further I got away from my college experience. Prior to entering Georgetown, I had led a fairly sheltered life, with little exposure to real-world issues like racism. Then I arrive at Georgetown, already an obsessed basketball fan, and the team that became the central focus of my life was led by a man who was so much more than a coach. He taught everyone around him what standing up for what you believe in looked like. And the more I reflect on it, the more I realize what an important figure he was in the formative years of my young adulthood.

I interviewed him multiple times over the years, for one of the student newspapers. I often sat court side on press row, and asked a very occasional question in post-game press conferences. And when I wasn’t covering the team or sitting in the student section, I occasionally sat in the front row behind the bench in my buddy’s dad’s seats. I saw Coach Thompson up close from multiple angles, on many occasions. And I have never, ever, seen a person command more attention from the people around him than John Thompson. He was in charge of every single room he walked into. Some of it was his pure physical presence… he was 6’10” and over 300 lbs, with the most booming voice any of us have ever heard. And some of it was demeanor… he rarely smiled in public, and was widely known to not tolerate one ounce of crap from anyone. In fact, anyone who sat within ear shot of Coach Thompson learned quickly about his intensity and his heavy reliance on profanity for “emphasis.”

He commanded unbelievable respect, from everyone, even the people who did not like him. He was completely self-confident and didn’t care an ounce what anyone else thought of him or said or wrote about him. I was in awe, bordering on speechless, every time I was in his presence. I remember vividly the first time I interviewed him, at the team’s media day in late fall of my sophomore year. It took me three times to get the question out of my mouth without stuttering. He was patient with me and really kind about it… in fact, another reporter tried to step over me and ask his own question. Coach Thompson halted the other guy and gave me space to ask my question… “Hold on… let’s give this young man a chance,” he said. (He knew I was from the student paper.)

Few in the world of sports fought harder for racial justice than John Thompson. He was unmovable, unwilling to compromise on the important issues, the way he ran and protected his team, and the racial pride that he brought to the overwhelmingly white world of college sports coaching and administration. The things that were written in the press about him and his teams, which were overwhelmingly black, always had a not-at-all subtle racial bias. In fact, one fairly prominent sports journalist once wrote a column that mentioned Coach Thompson and Idi Amin in the same sentence. I want to believe that we have made enough progress that such things would never be tolerated today, from any journalist.

The things that crowds said to and about Coach Thompson and the Hoyas were just awful. (I commend the ESPN documentary Requiem for The Big East to you, which will give you a clear picture of SOME of what Coach Thompson and his team endured.) The abuse his teams took was off-the-charts offensive. Trust me… I was there. I heard it, read it, and saw it.

I have two other distinct memories of Coach Thompson worth sharing with you today, both of which have to do with NCAA rules, and their racial impact.

The NCAA rules known as Proposition 42 and Proposition 48 were a really big deal in the 1980s. In really broad terms, the rules placed minimum academic and testing requirements on incoming freshman athletes. If a scholarship athlete failed to meet the minimum standards, they could be penalized by having to sit out their freshman year, or perhaps not even be offered a scholarship at all. The entire issue was highly controversial and divisive. It disproportionately penalized black athletes, and in the late 1980s, it was hard to have a conversation about big-time college sports without talking about these rules.

So, the first story goes like this… There was a great player for another Big East school who was Prop 48 ineligible as a freshman in 1987-88. When his team came to DC to play the Hoyas in his sophomore year, the Georgetown student section, which was nearly 100% white, was ready. The first time the player came to the foul line, the students started chanting “Prop 48, Prop 48.” (College basketball student sections have a terrible history of chanting awful things at players… and my school was no exception.) Coach Thompson was also ready, and he quickly charged down the court towards the student section and screamed at us to “SHUT THE F#&* UP!” He stood in front of our section and berated us… I was right there, in about the fifth row. You could hear a pin drop for the next two minutes. I have never seen or felt anything else like that. I was ashamed. We all were. And justifiably so.

At that moment, he was so much more than a coach, teaching the students about a lot of things, including a little something about basic human decency.

The second story occurred on January 14, 1989. I was on press row, and Coach Thompson staged a very public protest by walking off the court just before tip-off, refusing to participate in the game because of the Prop 48 rule. He was one of the most famous coaches in the game, his team was one of the top teams in the nation, and he was using his platform to speak loudly against a rule that many thought was unfair, unnecessary and racist. The issue was more important than the game. So he handed his signature towel to his assistant coach, and walked off the court, head held high. The place went nuts, he got a standing ovation and the game was delayed. I will never forget it. He was a man of uncompromising conviction. Once again, he showed everyone that he was so much more than a basketball coach.

Coach Thompson was a giant in every possible way. I can’t think of another coach like him, and while his impact on the court was profound, his impact off the court was dramatically more powerful and important. I can honestly say that John Thompson was the first person who taught me something about race, and he taught everyone around him how to stand up for what you believe in. He was a powerful voice on issues of critical importance, and he never wavered. Ever.

I am honored and grateful for having had the chance to meet him, cheer for him, and most importantly, learn from him.